I find it that identifying a missing something in the fridge, and adding it to a list does not work well for me. It’s either that I take a mental note of the missing groceries, and then, almost immediately, forget them until the unpacking of the just-purchased groceries, back home, several days later, or that I actually move myself into writing it down on a note, placed on the fridge, and then, of course, forget to take the note with me to the supermarket. Not working.

I have had an old tablet I purchased as my first Android device (and I’m not quite sure why I stayed liking Android in general after the experience I have had with the device). This tablet was very weak when purchased (didn’t get better since), and very cheap (that’s why I purchased it). It’s called ‘Eken M001’ and you can read a review of it here.

This tablet was horrible when purchased. You can hardly do anything with it. However, I came up with an idea – why not use it to hold a grocery purchase list on the fridge and sync this list to my Android cell phone? Wow! A silly, and very cool idea, at the same time.

So, today I have (re)installed the device, configured it to support Hebrew (not that simple on Android 1.6, a breeze on Android 4 and above. Guess what version I have there…) and added that nice list application “OurGroceries”. The result is in the following pictures: 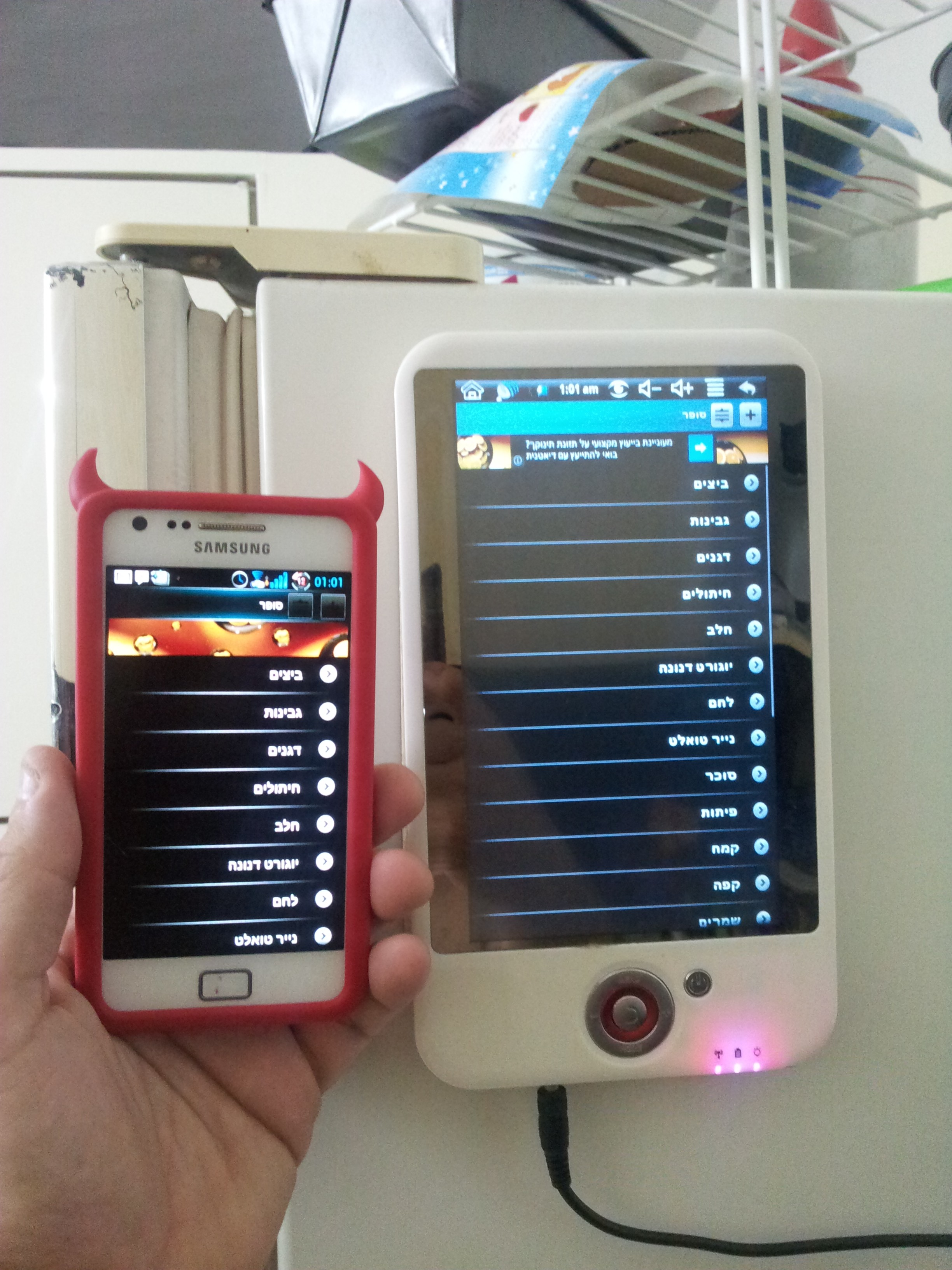 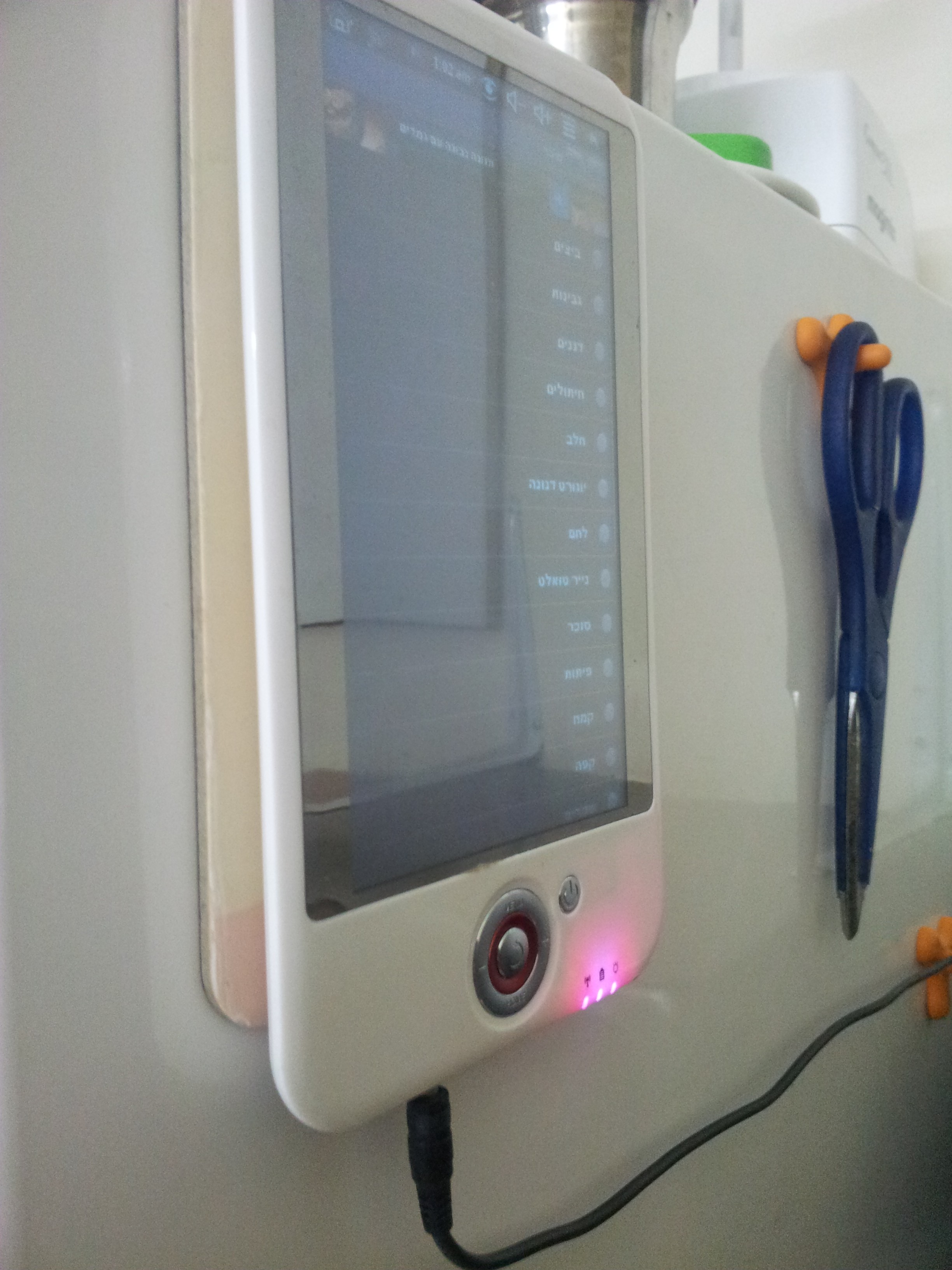 The fridge is hardly visible, acting as our white background. To prevent the device from falling, I have attached it to the sides of the fridge, and not to the door.

I hope it actually will save my problem there. Could be nice 🙂

I have been quiet during the last few days as I was playing with WordPress Mu as a solution for containing several WordPress sites, with one management interface. This is an amazing product, and following my implementation, about 18 blogs are already there. My site required some special handling. As you know, my URL was…

This is not exactly a technical post, but I had to bring it online. I am proud to be one of the first persons, if not actually the first one to own a biological portable computer (BPC). You will find no other such thing, I think. I have searched Google, after all. Although the docking…

For those of you not familiar with Hebrew, this entry won’t say much. For those of you who are familiar with it, it might say more.   HP Laptops are bundled with a pack of CDs, meant for easy reinstallation/recovery on their laptops. These CDs can be used as the quickest method to recover the…

I have had an interesting experience with HPE servers, where the BIOS was defined to allow max performance (in contrast to ‘balanced’ mode), but still – the CPU was not at max all the time. While we generally, strive to a greener computing, when having low-latency workload, we expect a deterministic performance. We want our…

I have OnePlus 7 Pro. Following the recent update to Android 9, (Just now updated to Android 10, so I don’t know if this problem still relevant) – Once every 2-3 weeks or so, the phone would not wake up from sleep, and remain having a black screen. Long-pressing on the power button has no…